The USA just endured its third-hottest summer on record, and it looks like the fall is on track to be warmer than average too, scientists reported Monday.

For the entire year to date, the nation is having its warmest year since records began in 1895, said the report by the National Climatic Data Center in Asheville, N.C.

About 80 million Americans sweltered through 100-degree temperatures at some point this summer, the climate center noted in its report.

The US National Research Council has been doing a lot recently to expand background knowledge of the climate system and of climate change. In tandem with a new report discussing strategies for advancing climate modeling, they have put up a an introductory web site on climate models (including some interviews with some actual climate modelers). 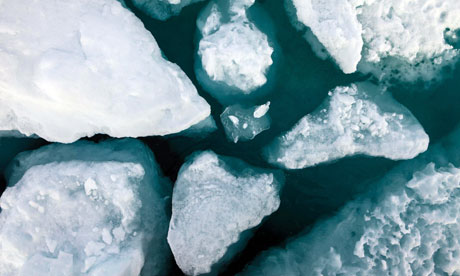 So here I am, writing this on a flight out to join Forum for the Future colleagues in New York (I know, I know…), pondering, as always, how to manage the advocacy challenge that lies ahead.

I'm leaving on the day the British media went into overdrive on the latest data from the Arctic on the extent of melting in the summer sea ice. Superlatives abound: 'worst ever', 'unprecedented', 'no known comparison in at least three million years' etc. But the thing that really grabbed me in all the coverage was the personal testimony of some of the scientists involved: shocked, horrified and astonished as they clearly are at the prospect of an ice-free summer Arctic by 2030 – decades earlier than the same scientists were predicting just a few years ago.

From the top it seems that the Valley of Geysers - a single boiling body. Each underground fountain - with its own character. At a photo shoot for the "famous" queues. Tourists are willing to stand for several hours in anticipation of rare footage.

"We see a stage spout. And at any moment expect a geyser eruption "Big" - explains the tour guide.